Have suggested titles? Please e-mail me at: kevinrkosar [at] gmail.com !

END_OF_DOCUMENT_TOKEN_TO_BE_REPLACED 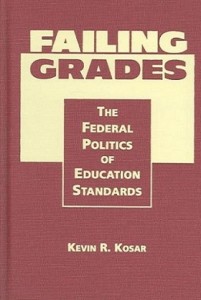 Buy an author-signed copy for $10!

Summary. Presidents from both parties, supported by parents, teachers, and civic leaders have tried and generally failed to increase student achievement through federal policy-making.  Supposedly path-breaking legislation to “leave no child behind” has hardly made a dent in the problem.

What is going on?  Kevin R. Kosar delves into the political maneuvering behind the crafting of federal END_OF_DOCUMENT_TOKEN_TO_BE_REPLACED 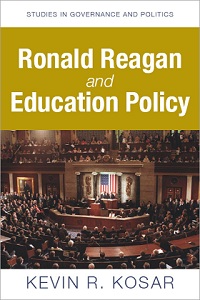 Please support this website—buy a book!

Ronald Reagan entered the presidency promising to return K-12 education policy back to states and localities.  Ironically, Reagan ended up both expanding and legitimizing the federal role in schooling.

How did this happen?
END_OF_DOCUMENT_TOKEN_TO_BE_REPLACED

This book carries information on a broad range of aspects of America schools in the mid- and late-19th century. Chapters covers the structure of schooling systems, their cost and revenues therefore, attendance, religion and morals, teachers and their training, and curricula.

The author, who served as secretary of the UK’s National Education League, also treats the topic of governmental relations (federal to state, state to local). These two quotes underscore the centrality of federalism in U.S. schooling.

The dread of “centralisation” which prevails throughout the States has had the effect of checking every movement for enlarging the powers of the National Government. The whole tide of public sentiment in America is in favour of a perfectly unfettered working of the State systems. (pp. 20-21)

The annual meetings of the National Educational Association are attended by the most prominent educationists from all parts of the Union, and all topics affecting education are discussed. At the meeting of the Association held at Washington, January, 1874, it was resolved unanimously, “That this
convention strongly approves the policy hitherto pursued by the Federal Government, of leaving the people and local Government of each State to manage their own educational affairs without interference, believing that the principle on which this policy is based is as sound educationally as it is politically. (p. 23)

This fascinating book can be read freely on the Internet at http://archive.org/details/freeschoolsystem00adamiala. It is available in a variety of formats, including PDF, Kindle, and EPub. 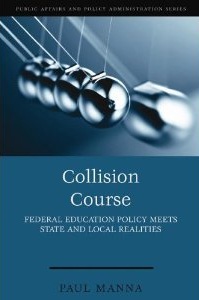 You may order a copy of this book here.

This website is devoted to the history of federal education policy. Manna’s study of the No Child Left Behind Act is not a history of the law.  Those wanting a sense of the political wrangling that produced NCLB ought to look here.  So why bother to mention this book on this website?

Put generally, policy-making and policy analysis are highly regarded in the U.S.  Plenty of universities have well-funded, high profile policy schools that funnel wonks into government. Politicians, meanwhile, may seize the mantle of statesman or law-maker (Solon!) by crafting  sweeping legislation.