LBJ grew up in extreme poverty. He saw first-hand how schools could be the ticket out of a life of ignorance and hardscrabble survival. Johnson also knew that most schools got the preponderance of their funding through local property taxes. So, poor neighborhoods tended to have the schools ill-equipped to handle the “special needs” of their students. In a speech at the University of Michigan in 1964, LBJ declared,

“A third place to build the Great Society is in the classrooms of America. There your children’s lives will be shaped. Our society will not be great until every young mind is set free to scan the farthest reaches of thought and imagination. We are still far from that goal.”

This was the context for his push for the Elementary and Secondary Education Act of 1965, which was a key part of Johnson’s anti-poverty program.

END_OF_DOCUMENT_TOKEN_TO_BE_REPLACED

In this article for Politico, I show how federalism has fostered a chronic ideological battle around the federal role in schooling. “The Constitution didn’t authorize the federal government to make schools policy. It is not among the enumerated powers in Article I section 8, and the 10th Amendment reserves powers not delegated to the federal government by the Constitution to the states and the people….” (Read more at Politico.com)

The below 1963 Herblock comic exhibits other aspects of the perennial politics of education: spending concerns, and the notion that federal school aid can and should reverse the effects of poverty and crime. (The comic is notably liberal—depicting the opponent of federal aid as old and and histrionic.)

The National Archives and Record Administration has the records of the Bureau of Indian Affairs, which operated schools for American Indians. The archival holdings are listed at: http://www.archives.gov/research/native-americans/bia-guide/schools.html. The federal government started making education policy for American Indians as early as 1819 with the Indian Civilization Act, which authorized funds to be granted to religious and private groups to school American Indians. (On the boarding schools, see here.) Eventually, the U.S. government itself via the Department of the Interior’s BIA began operating its own schools. 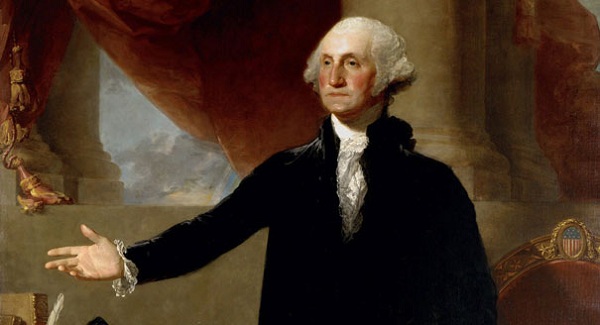 The U.S. Constitution carries no explicit authorization for the federal government to have any role in education. Nevertheless, this did not preclude the nation’s first president from advocating the creation of federal civilian and military universities. George Washington made his case to Congress repeatedly, perhaps most forcefully in his eighth presidential address (1796):

I have heretofore proposed to the consideration of Congress, the expediency of establishing a National University; and also a Military Academy. The desirableness of both these Institutions, has so constantly increased with every new view I have taken of the subject, that I cannot omit the opportunity of once for all, recalling your attention to them…. Amongst the motives to such an Institution, the assimilation of the principles, opinions and manners of our Country men, but the common education of a portion of our Youth from every quarter, well deserves attention. The more homogeneous our Citizens can be made in these particulars, the greater will be our prospect of permanent Union; and a primary object of such a National Institution should be, the education of our Youth in the science of Government . In a Republic, what species of knowledge can be equally important? and what duty, more pressing on its Legislature, than to patronize a plan for communicating it to those, who are to be the future guardians of the liberties of the Country?

The Institution of a Military Academy, is also recommended by cogent reasons. However pacific the general policy of a Nation may be, it ought never to be without an adequate stock of Military knowledge for emergencies.

Washington was dispirited by his inability to see his vision into existence. He declared in a 1797 letter,

My Sollicitude for the establishment of a National University in this Country, has been great, and unceasing; but as the Sentiments of the Legislature have not been in unison therewith, I had postponed the further consideration of the subject to a moment of more leizure (than has lately been my lot) to see if I could devise some Plan by which my wishes could be carried into effect.

Washington died two year later. In 1802, Congress established the United States Military Academy (AKA West Point), the first of five national military schools. Congress later established civilian higher education institutions, including Gallaudet (1857) and Howard universities (1867), but it did not create a national university for the study of government as Washington desired. Legislation to establish a United States Public Service Academy was introduced in the 109th through 111th Congresses; none of these bills emerged from committee .

Below are links to four Washington documents that mention his proposal for a national university.

“In its early years, school lunch was a child welfare program. Later it became a matter of national security. Malnourished children did not grow up to be good soldiers. In 1943 the War Food Administration took over—and dramatically expanded—the federal school lunch program.”